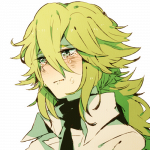 aka A fire, rekindled.

This is your user page. Please edit this page to tell the community about yourself!

A space Pirate that has two forms:  A red-leafed Floran (Nahkriin), which is transformed into in the presence of female Florans, and his Normal Human form (Tai). Tai lives to make that extra buck and hunt Boss Monsters; but despite his lifestyle, he would like to settle down with either a floran or Avian wife and have a son.

He uses a Human Machinegun that he used to start his infamous reputatuion(Which is what gave him the title MGK), and also wields a Energy knife. He uses a variety of swords. Tai, in a pinch, will resort to drastic measures,  once leveling a Glitch City on Alpha Tau in order to defeat a crew of Hylotls.

Retrieved from "https://starbound.fandom.com/wiki/User:Nahkriin_X?oldid=40574"
Community content is available under CC-BY-SA unless otherwise noted.