This article is a stub. You can help Starbound Wiki by expanding it.

Note: The following information is based on older beta versions of Starbound, and does not represent the recent 1.3 SpaceFarer Mech update.

Mechs are vehicles that will aid the player with transportation and combat, due to weapons mounted on their frames. The five known Mechs are the Human, Glitch, Hylotl, Apex and novakid Mechs . Mechs are acquired by going to the far right in the basement of the outpost and talking to the NPC there. You will get a quest, and upon completion, you will have access to your mech. The mech is deployed via pressing the button near your beam up icon on the right-hand side of the screen. The mech can also be deployed from your ship (using the teleporter) directly to a planet's surface. The mech has a tiny jump and does 10 damage currently in v. Angry Koala. Players can still take fall damage with the mech equipped. There are currently two glitches: sometimes a mech's legs will not appear to some players and the bullets will only do 1 damage. The apex mech can only be obtained through cheating as of now. A glitch mech was added in v. Furious Koala. 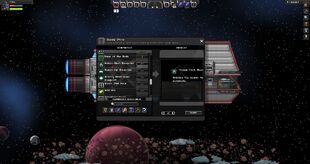 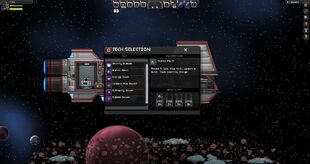 A Human Mech being equipped with the tech option. 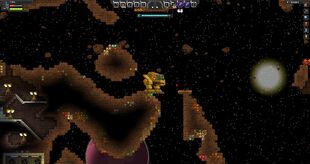 The Mech in an asteriod field.
Add a photo to this gallery
Apex Mech:
Retrieved from "https://starbound.fandom.com/wiki/Mechs?oldid=57639"
Community content is available under CC-BY-SA unless otherwise noted.