The Glitch are a playable race in Starbound.

The Glitch were part of a program invented and built by an unknown race of enormous intelligence as a means of simulating the social and technological progress of a non-human civilization.

These experiments took place in a vast number of regions across the universe. Despite changing a plethora of variables, each civilization eventually destroyed itself when its technological progression began to overtake its social progression. The only exception was the Glitch.

For reasons unknown a fault caused the Glitch to become stuck early in the simulation, where they now remain. The experiment long abandoned, the Glitch are unable to shake their medieval values and beliefs. They're entirely unaware of their origin and are built to experience feelings and desires, like all other sentient organisms.

Aside from their role as playable characters, the Glitch can be encountered both in towns - similarly to other races - and in castles reminiscent of those from the medieval period. Glitch villages are quite useful to players early in the game, but the castles frequently have a large number of guards that tend to attack immediately if the player gets too close to the castle, meaning that Glitch castles are less useful for early players than are some other villages. The Glitch civilians, however, behave similarly to any other sentient race encountered in the game, and some Glitch will even trade with the player for pixels.

Most large castles also have a single Glitch king, adorned in gold with a crown: like his soldiers, he is hostile on sight and will try to strike down even the most peaceful of visitors, and he will drop his crown upon death. Notably, the Glitch King is often the only occupant of the smaller castles; some of these smaller castles can also house a single wizard instead, who will sell the player stim packs.

According to Tiy's description of the race, the Glitch apparently reproduce when a pair of Glitch literally construct a new Glitch from scratch. Occasionally, however, errors emerge in the process, and this results in Glitches who are fully self-aware and freed of their medieval programming. These Glitch (often called "outcasts") are hunted down mercilessly by their own kind, who deem them as being insane: some, however, escape, forming villages across the cosmos.

No illustrated scenes were made for this sequence.

An experiment that became a race, the glitch were built to simulate the rise and fall of civilizations.
But something went wrong: the glitch became stuck in time, a civilization never falling.
Some had their programming reset, gating knowledge of the stars.
Their words considered blasphemy, these glitch were jailed... and often executed.
A few manage to escape into the stars, their minds free of direction, ready to carve their own path across the cosmos.

A small section of a Glitch building. Note the medieval style.

A large screenshot of a Glitch castle. 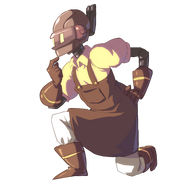 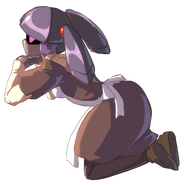 Retrieved from "https://starbound.fandom.com/wiki/Glitch?oldid=56780"
Community content is available under CC-BY-SA unless otherwise noted.