The Florans are a playable race in Starbound.

One would expect a race of sentient humanoid plants to be peaceful, nature-loving environmentalists – that presumption is what allows this hyper-aggressive tribal civilization to thrive. Unwitting explorers are prey of choice to the carnivorous Florans, who frequently salvage or reverse engineer the technology they bring to enable their colonization of the stars.

Introducing space travel to the primitive Florans had the undesired effect of Floran colonies spanning across star systems, each with their own customs and levels of aggression. Despite this, individual Florans have been known to split apart from their society to lead their own lives in isolation or in the solace of other races, at the cost of being cut off from the collective and considered enemies of all flora for good.

Though a unisex race, Floran culture values survival through reproduction and expansion over environmentalism or any perceived bond to Mother Nature. Funeral rituals and wars with rival factions are commonplace, though it remains unclear whether it’s out of conservation or simple tradition.

Their aggressive nature appears to be borne from a lack of a concept of non-plant life as opposed to outright contempt. Owing to their relatively young age as a species, this tenet dominates their culture and justifies their treatment of visiting races, though there are signs of some beginning to question this, implying that Floran individuals may not be inherently “evil” as previously thought, but that they are able to make peaceful societies that are able to live in harmony with the other non-plant races.

To smell fear
To hunt
To savour the taste of flesh
To consume, to spread, to multiply
These things are Floran
There is no place amongst the Floran for those with different taste. 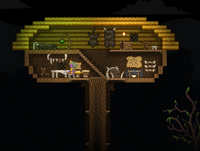 A Floran home. Note the primitive style and tribal nature of the decorations. 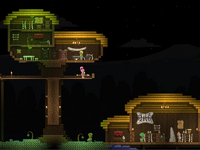 A work in progress respawn animation

A screenshot from the WIP Floran intro that was posted on the July 3rd Progress Update that stirred much negative feedback from the community. However, Mollygos later stated that it was a section that was still being modified (from Humans around a campfire to a group of Florans around the fire.) 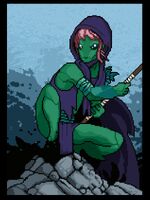 A screenshot of the Floran intro, posted on July 4th after the previous image was shown.
Čeština Deutsch Español Русский
Community content is available under CC-BY-SA unless otherwise noted.
Advertisement